The earliest parts of the church date from Saxon times and many changes have been made in successive generations. The church comprises a chancel, a vestry and a nave with a porch on the north side. There is a saddleback tower containing the belfry at the west end.
Norman features include the rounded arch over the entrance door with zigzag decoration and scalloped pillars. Two small slit windows high up on the tower probably date from the 13th century.
There is evidence of a rood screen and stairway dating from the 15th century; as are the three lower windows in the nave. The west window, visible only from the outside is of 17th century origin. Stained glass was added in the 19th century when the chancel was enlarged. The east window depicts the crucifixion, St Mary and St John. The south west window depicts St Bartholomew to whom the church was originally dedicated. The stained glass in the high north window at the back of the nave is the work of Claudia Phipps. It was installed in 2012 and depicts the parable of the sower. It is dedicated to Philip Weeks who was churchwarden for 50 years.
The tower originally housed 3 bells of which only the smallest now remains. It was cast in Bristol in 1400 and now in 2017 it is being refurbished. It chimes the hours, an external clanger being operated by a clock mechanism which, in 2000, was brought down from the tower, re-sited at the back of the nave and fitted with an automatic electric motor rewinding mechanism with the help of a donation from the Duchy of Cornwall. The surrounding glass cabinet was designed by architect William Bertram and the glass engraving of Prince of Wales feathers was by Frank Grenier.
The small pipe organ was originally a house organ dating from about 1800. It has been restored in 1989 and 2015. It was given to the church by the widow of the Very Reverend J Armitage Robinson who was Dean of Westminster Abbey 1901 to 1911, becoming Dean of Bath and Wells until just before his death in 1933. The organ was a presentation gift to him when he left Westminster.
Finally, on the west exterior wall there is a large raised stone rectangle which no-one has been able to explain. 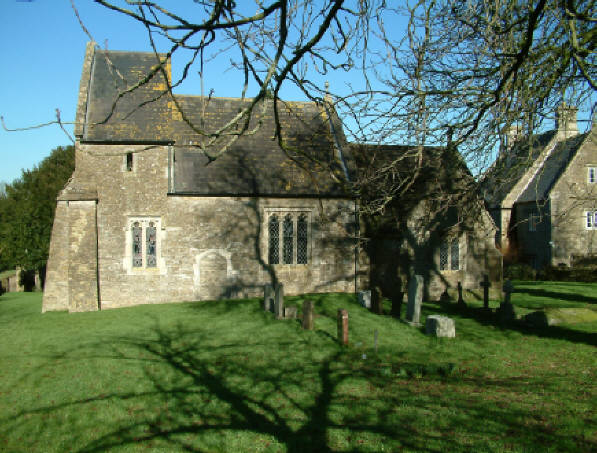