The two tiers of carving in the cornice of the Chancel Screen originally formed part of the medieval Rood Screen. In 1854 the cornice was the only part of the old screen still in existence; it was then removed, and used in short lengths to ornament the Reredos. The present screen, embodying this old cornice was erected 1931 and in 1932 a new Reredos took the place of that made in 1854.
The pulpit bears the date 1608.
The Chancel archway was enlarged to the present size in 1854; it took the place of a low square-headed doorway, although on either side there were remains in 1854 of the column of a Norman arch.

The tower was built from its foundations in about 1490, the square-headed windows in the Nave dating from the same period. The device of three sickles interlaced on the exterior of the tower [south] is the escutcheon of the Hungerford family of Farleigh Castle.

The oldest visible part of the church is the Norman Arch in the porch, dating from around 1180; the arch-stones appear to have been reset at a later time, and the male and female heads at the abutments added then [probably around 1320]. On the underside of paving in the porch on either side of the doorway are specimens of scratch dials, which were intended to notify the hours of services. On the underside of the paving in the porch in the southwest corner is a Maltese cross which probably indicates that this stone formed part of the Medieval stone altar. On the south east side of the main door is the niche which held the holy water stoup. The niche above the door, constructed for a figure, dates probably from about 1490.

The present organ was given to the church in 1875, when an extension to the chancel was built to contain it.
During the construction of the channel round the walls in 1928, a short length of masonry was found facing the organ chamber. It has been left visible with its original purpose is unknown.

The font is said to be late Norman. At some time, probably in 1854, new stonework was inserted on either side at the top. This was done to repair the damage done by the removal of iron staples. By order of the Bishops, in or about 1220, fonts were to be kept locked with secure fastenings because the hallowed water had been stolen for use in black magic.

The solid oak pulpit steps, the base on which the cross-head rests, and the box containing the organ books are made from the remains of ancient beams which formerly supported the bell cage.
The carved oak board, now in use as a credence table, served for some years as a book-rest in the pulpit, the present book-rest being given to the church about 1880. The carved oak board appears to have been originally part of the back, set against a wall immediately above the pulpit. Another piece of carved wood, matching it, but much decayed and worm-eaten, was found upside down in 1931 forming a part of the pulpit steps. 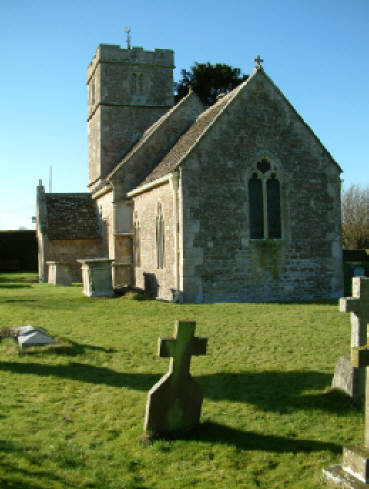 The east window, representing the angels and the holy women of our Lords sepulchre is the work of Mssrs. Clayton and Bell, and was given to the church in 1863.

The west window is the work of Mssrs Horwood of Frome, formerly of Mells, as is the window in the south wall of the Nave, east of the porch, depicting Jacob at Bethel and at Penuel. The window in the south wall, west of the porch, was made by Mssrs. James Powell and sons of Whitefriars.
The Lectern was given in memory of the memory of Rev. George Baker of the Old House, Freshford, brother of the then Rector of Tellisford, who died in 1881,.

The mounds in the churchyard were levelled in January 1926. A plan drawn to scale showing the old mounds is kept in the Vestry along with a key to the names of those interred.

The old yew tree beside the tower was quite possibly planted in obedience to a statute of Edward 1 (1272-1307) ordering the planting of yews in churchyards, so that his archers might have a supply of this wood for their bows.

The daffodils in the churchyard were taken in 1884 from a glebe field where they have grown wild from time immemorial.

About half way between the church and the public road, in the east wall flanking the path is a slab of freestone bearing one half of a Hungerford escutcheon, with a sickle and one half of the wheat-sheaf.