The history of Hemington Church is typical of many English country churches. Built by the Normans, it was extended and altered around 1230 with further work 100 years later and again during 1480-1500 when the tower was built.
The porch is Victorian and the pews date from the early 1600’s. Certain parts of the building are of substantial architectural interest. The Parish includes the medieval manors of Hemington, Highchurch, Huntminster and Faulkland, all of which probably had village settlements though today the principle centre of population is Faulkland. Though there is no direct evidence, the names Highchurch and Huntminster suggest that originally there were churches at these places. Unrest following the Norman Conquest and the severity of the Black Death in the area in 1348 permanently affected the pattern of settlement. St Marys is Grade 1 listed by English Heritage. 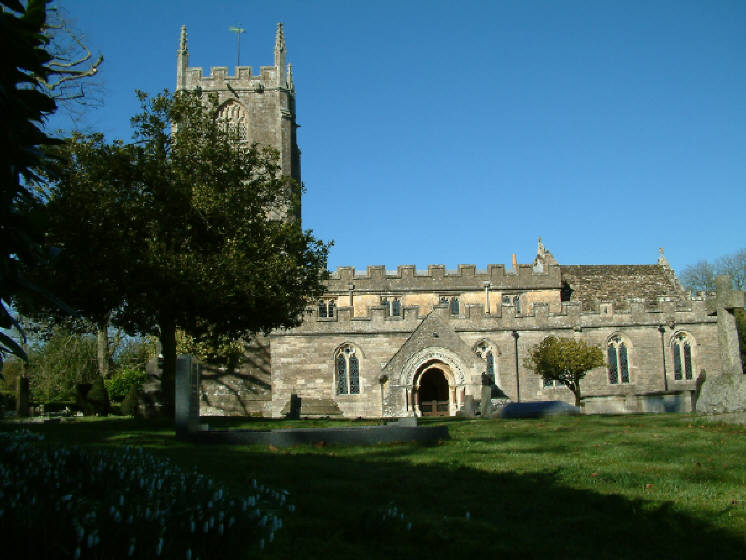 The general impression is of a late 15th century church in the Perpendicular style. The parapets, many of the windows and the tower date from this period though this belies the greater age of much of the building. The tower has double windows at the intermediate stage and a single window at the top. The windows at each stage are of different design. A change of builders, a shortage of funds, or a delay in completion, may account for these differences and the comparatively plain top stage. Inside can be seen the springing for stone vaulting, never completed.
There is a ring of six bells, two of which are medieval. A detailed description, together with the inscriptions, will be found inside the tower. The windows of the south aisle date from the 1340’s as does the western-most window of the nave. The doors in the porch and in the west front of the tower are both 15th century. The porch is Victorian (1856), said to be the work of Sir Gilbert Scott, the distinguished church architect who was active in the area but it is curiously unscholarly. The humbler structure it replaced can be seen in the drawing of the church in the 1840’s. Legend has it that the Black Death plague pit is on the north side of the church close to the vestry door.

Of the Norman church the principal features are the chancel arch with delicately cut ornamentation on the capitals and the circular font decorated with a double ring of scallops. The south aisle is Early English work (c. 1230) and of particular note are the south door and the arches between the chancel and the aisle with a cluster of Purbeck shafts to the pillar and the piscina on the eastern respond. The arcade between (the nave and the aisle is also of the same date but the windows, (again with Purbeck marble inner shafts), are Decorated work of c1340. The clerestory and the nave roof, with oversize grotesque corbels, are late 15th century. The roof itself has been renewed but there is a good 15th century ceiling in the aisle supported by the corbel heads described overleaf. The pews are thought to date from the 17th century and not earlier. The remainder of the 17th century fittings were removed in the restoration of 1856 and an idea of the appearance of the church prior to this can be got from the picture on the north wall of the nave. The stairs to the Rood Loft behind the pulpit are a trace of pre-Reformation arrangements. The text painted on the north wall of the nave is post-Reformation – late 16th century. There is a 16th century chest on top of which is a copy of the Authorised Version of The Bible dated 1634 and a great lectern Bible printed in 1781 presented to the church by the Rev. Giles Hill. In the chancel within the sanctuary can be seen a curious chair presented to James Turner of Faulkland in 1890. He was a local character who built in the I880’s, Turner’s Tower which stood alongside the A366 between Faulkland and Ammerdown. He also built (for convenience while attending church) the little coach-house and stables at the corner of the churchyard – it has “J.T. 1881” on the gable. Later Rev. J.S. Raymond (rector 1882-1921) used it to garage his motor car which was one of the first in the area. The memorials are of no great artistic merit but have local interest. In the chancel is that of the Hills, commemorating a family whose members were Rectors in an almost unbroken line from 1678 to 1814 during which time the old rectory west of the church was built. In the south aisle are two tablets to the Vigor family who in the late 17th century purchased the Manor Highchurch and opposite the organ is an inscription dated 1667 which quaintly mixes English and Latin.

Often minor items of sculpture pass unobserved but Hemington has a number well worth studying. On the west face of the tower, dating from circa 1500, by the window above the door .. Man with basket and ? Pilgrim with hat and staff. In the south aisle, dating from c. 1230, a fascinating series of corbel heads carved as half length figures; some depict monastic life in a very unflattering way. The most interesting are
I. Man with tooth and ? stomach ache.
2. Man holding in one hand a pot with handle and in the other a brush.
3. Abbot with crosier in a fool’s cap and bell, a goose across his shoulder and a pig beside him.
4. Man in gown wearing a fool’s cap and bell.
5. Fat monk holding money bag with hand raised in mock blessing.
6. A bearded face of great beauty.